Apparently, we now live in a beach house.  Not really, but apparently sand boxes can create a very realistic simulation.

(Apparently, my kids have been using that word too much.  Mom’s started copying.)

I’ve always wanted a sand box for the kids.  Whenever we visit somebody that has a sandbox, Megan especially will sit for hours and just dig in the sand.

Derek finally agreed to build one!  And when he builds something, he BUILDS something.  If you get my drift.  But here — pictures are worth a thousand words:

First, he made a box from a bundle of railroad ties.

Next he added 4 tons of sands: 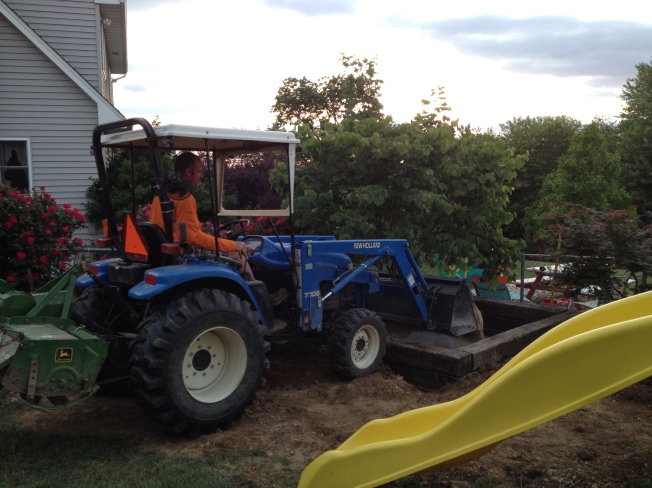 He finished it by tractor light, and Mercy was the first child to set foot in the sand.  She promptly scooped up and ate fistfuls of sand.  I’m not exactly sure what deficiency that suggests. 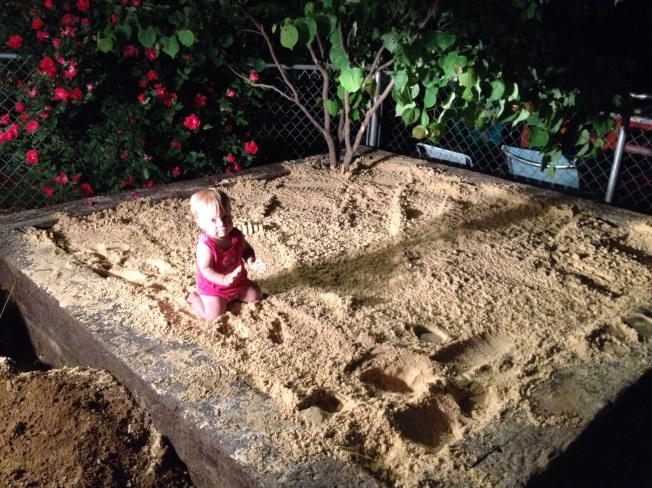 (Yes, I realize there is a tree buried in sand in this picture.  My husband boxed it in, after his mom told him it wouldn’t hurt the tree.  Somebody else told us that the tree would die because the roots couldn’t get oxygen.  An actual tree expert told us that the problem would be rot around the trunk that the sand would create.  Rot would bring bugs, and bugs would kill the tree.

So.  Derek cut out the bottom of a 5 gallon bucket and put it around the tree.  Sand not-so-mysteriously keeps finding its way to the bottom of the bucket, so we’ll have to keep scooping it out, but maybe the tree will survive.  If not, it was a filler tree anyway!  I have a Sugar Maple growing 5 feet away from it, and the Redbud is getting very close to interference.)

The kids LOVE the sandbox!  The morning after it was finished, Cameron was up and outside before I was even awake, and had dug all the way to the bottom of the sandbox.  I love that all 6 of my kids can sit and play together!  We’ve even had cousins in there too.  The kids have played in the sandbox every day since Daddy built it.  Tons of fun.  Quite literally. =)

Yes, I do have the kids rinse off and brush down before they come inside my house, but you’ve been to the beach, right?  Sand wins.  Every time.

So I’ll just keep sweeping sand into piles and wishing I had some saltwater and dolphins to go with it!

I'm Ruth, the mom that lives here. "Our little patch of heaven" is a home we built with our bare hands, on an acre of land in the country. Our six kids are what truly make it heaven! We love each other, we love God, and we love our messy, noisy life. Most of the stories you find here will be about our adventures as a family, the wild and sweet children I call mine, and my attempt to be the best wife and mom I can be. 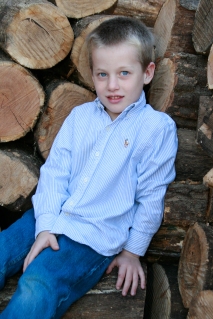 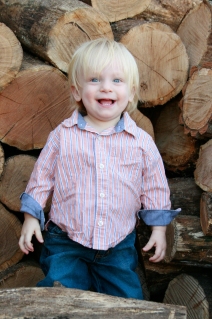 Zach
Follow Our Little Patch of Heaven on WordPress.com